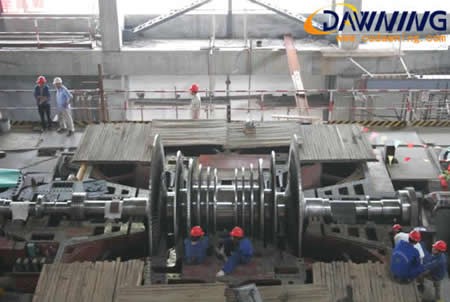 The power plant project is located in laibin, guangxi. The owner is laibin power plant extension branch of guangxiyuan electric power co., LTD., and the design unit is guangxi electric power design institute. The construction area is 65,000 square meters, and the contract value is 265 million yuan.

On the morning of October 16, 2009, laibin power plant was full of excitement and jubilation. The FGD project with a total investment of 179 million yuan completed 168 hours of trial operation 77 days ahead of schedule, and was successfully completed and put into operation.

After the project is put into operation, it will reduce the sulfur dioxide emissions by 45,000 tons every year, making positive contributions to the realization of a bluer sky, greener water and greener mountains for guests.

The completion and operation of the project has played a key role in the sulfur dioxide emission reduction task assigned by the ministry of environmental protection and the government of the autonomous region, played a positive role in the energy conservation and emission reduction target, played an important role in the construction of a livable city with mountains and rivers, promoted the new industrialization process, and brought benefits to the guests and people.

It is the bright spot of new city environmental protection.